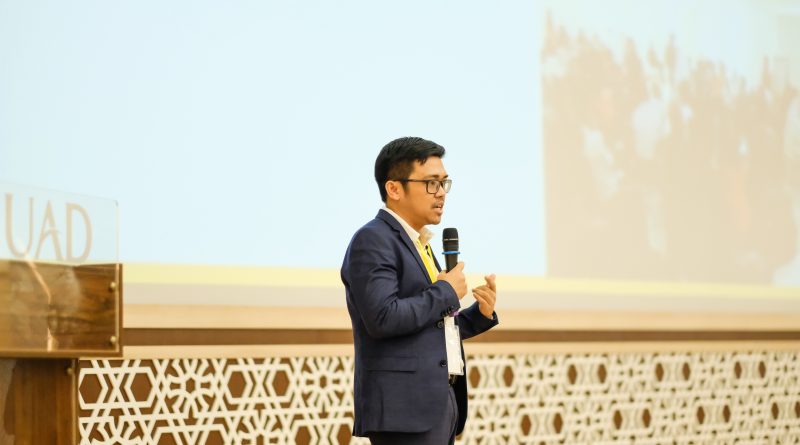 The second day was hosted by UAD and commenced with a formal opening ceremony.

After a welcome by Rector Dr Muchlas, Ida Puspita, Head of the International Office, and Nadine Sulkowski gave speeches which were followed by a presentation about UAD’s current disaster response activities.

Having allocated its corporate social responsibility fund to mitigation and disaster recovery, UAD has established a Center for Environmental Studies and Disaster Management operating within the Research and Community Service Bureau.  Together with the Faculties of Psychology, Public Health, Pharmacy, Teacher Training and Education, and Islamic Studies, the Centre has been involved in numerous disaster recovery initiatives, for example during the Merapi volcanic eruption in Yogyakarta in 2005 and the earthquakes in Lombok and Palu in 2018.

With UAD being part of the Muhammadiyah Foundation, a national network operating schools, hospitals and over 130 universities across Indonesia, the Centre conducts training on mitigation and disaster management and collaborates with the Muhammadiyah Disaster Management Centre in various areas of disaster recovery, including volunteering for psychosocial, logistical and health assistance, and fundraising. UAD’s Centre for Environmental Studies and Disaster Management showcased some of its work in an exhibition throughout the day. This included, for example, picture books designed to educate young children in disaster awareness.

Adhi Setyo Santoso from President University (Jakarta) presented the strategy for dissemination and exploitation, which included the proposed web architecture for connecting the websites of future Centres of Excellence with the portal of the national disaster resilience network.

Gideon Capie and Jo Bridge from the University of Gloucestershire Funding Office led a workshop on project administration and financial management.

The day ended with a second press conference attended by representatives of the local media.

The work package leads from Indonesia UAD, UII and President University are consortium partners in the Erasmus + funded project “Growing Indonesia – a Triangular Approach” (GITA), a Erasmus+ funded million Euro project also managed by the University of Gloucestershire under the leadership of Professor Neil Towers. All three have been instrumental in devising the initial plan for the BUiLD project and in coordinating the establishment of the new consortium.  UCC, IPP and Hafelakar are collaborating with the University of Gloucestershire on other European-funded projects.

The BUiLD Consortium Welcomes Geoffrey Sallis to the Advisory Board